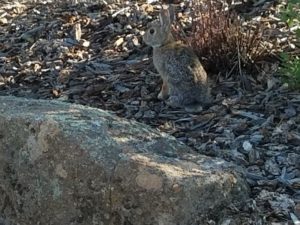 This bunny is hard to see as he is disguising himself as a mulch rock. His little eyes were watching me as I framed him in a photo. When he heard the click of the smartphone camera, he took off.

What followed next was like an animated cartoon. A black and white cat, who had been stealthily watching him from somewhere behind both of us, took off after him. That little cotton ball tail was bouncing, with the cat in full pursuit. Down the block they went flying over sidewalks and lawns. The cat’s long legs were racing, but that little bunny was quite a bit faster.

Once I caught up to where I’d seen them round the next corner, I saw a glimpse of black and white well hidden behind a bush, crouched and ready for more fun. And the bunny? Nowhere to be found.

The tiny click of my camera doesn’t seem like much of an alert, but it proved to be the impetus for that bunny. Sometimes the message of alert we receive is quiet and almost unnoticeable. Sometimes it comes from the least expected source.

However it was a reminder to me to listen. Listen carefully. Don’t doubt the messages you are getting, wherever they may come from. You may be alerted to danger or to a bit of fun. You may discover a clue to the next step on your journey or to an amazing inspired opportunity.