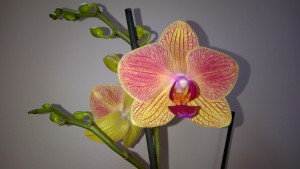 With my orchid in full bloom, I keep finding intuition in the air. Stories and situations are coming my way to indicate that often we know, and we don’t know how we know, but we just know. And sometimes it produces a feeling of such sensation that goosebumps appear.

A recent 20/20 episode featured people looking for their long lost relatives – biological mothers and fathers, brothers and sisters, etc. One woman was determined to find her half-brother. She wasn’t even sure he knew he had a sister. She contacted genealogist Pam Slaton, who helps people with their searches with her deep investigative skills. Gina felt a strong need to make contact and was elated when Pam called saying she thought she had found the brother. Gina called and for a number of times her brother was not available or did not have time for such an important conversation, so she still hadn’t confirmed that it was indeed her brother. During this process of phone calls, Gina went for a night out with her husband to a casino. As they stood watching gamblers at the table, Gina had a very strong sensation that the man she was viewing from the back was her brother. She had goosebumps and shivers but did not have the nerve to approach him. The next day she was able to speak on the phone to his wife and confirm that indeed he had been at the casino the night before! Gina’s intention had been so strong that she came within a few feet of her brother before they finally met. Eventually she was able to make full contact and a wonderful reunion ensued.

The program even commented that sometimes these mysteries are solved by research and investigation, and sometimes by intuition. I’m so glad that these gifts of the spirit are finally being acknowledged. Here’s another story: in a recent phone call with an East Coast friend, I discovered that she was in a new relationship. How that meeting took place gave me goosebumps. This was a person she had known around her community for years. Years past she had worked at a restaurant and he had been a friend of the bartender. His son had attended the same school as her daughter. She’d run into him occasionally at community events. Over the holidays they had ended up at the same party. All of a sudden she said she saw him looking at her from across the room. She’d had a goosebump kind of feeling and as they came together and talked, she realized she had always known him but in an instant she saw him in an entirely different light. She called it “the moment.” They’re now dating and in the process of mutual discovery. I was celebrating when she told me the story – for her good fortune and for that indescribable moment of knowing.

I do believe that despite (or perhaps because of) the current unsettling movements in politics, religion and long-held outdated beliefs, another wave of understanding is reaching many who understand that we all have a deep inner knowing of many things seen and unseen. Sometimes goosebumps arise, but meanwhile we are learning to trust the messages the universe brings us and celebrate their appearance.